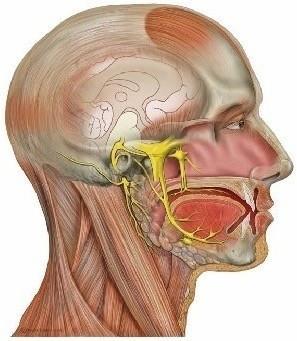 Trigeminal neuralgia (TN) is one of the most common, and also the most well-defined causes of facial pain. It is defined as sudden, usually unilateral, severe, brief stabbing or lancinating, recurrent episodes of pain in the distribution of one or more branches of the trigeminal nerve. Less often, patients may have a constant aching or burning sensation most of the time. A tingling sensation or aching may also precede the pain episodes. Vibration or contact with the face may trigger the intense flashes of pain. The attacks usually last several seconds to a couple of minutes and repeat over the subsequent hours to weeks. The episodes then disappear for months to years before recurring. It can be bilateral, but does not involve both sides simultaneously. Rarely does the pain occur at night when the patient is sleeping. It tends to affect females slightly more than males at a ratio of 1.5:1, and increases slightly with age. Generally, the attacks worsen over time, and the latent periods become more infrequent and shorter.

Controlling facial pain with current medical and surgical treatments is known to be very difficult. The standard medical approaches are anti-inflammatory, anticonvulsant, and antidepressant medications. After these fail, local anesthetic blocks are attempted, but they only provide temporary pain relief. Lastly, percutaneous or open procedures may be done or even more rarely, neurostimulation. However, peripheral nerve stimulation may be a viable option earlier in the treatment of chronic facial pain. Medical treatment is usually the first-line therapy.

Carbamazepine is the most effective and usually has manageable side effects. If it is ineffective or not tolerated, then combination with gabapentin, phenytoin, baclofen, lamotrigine, topiramate, or tizanidine may be beneficial. It is recommended to periodically taper the medications down in patients experiencing pain relief in order to check for the occasional permanent remission.

In patients refractory to medical treatment, there are several options for surgical procedures.